Happy Wednesday fellow Brass Chicks! We are so excited to introduce our newest member of the Brass Chicks team:

We are so excited to be able to work with Anna Garcia on redeveloping and fixing our website. As a fellow female brass player, Anna completely understands our mission and working with her was such a breeze. We can’t wait to do more with her in the future and thank you Anna SO MUCH for all of your help fixing our site so far. We are so happy to have you be our Women Crush Wednesday 🙂

While we haven’t done a formal interview with Anna yet, we are happy to share some clips from past interviews she has done in her transition from trumpet player to software engineer. Women in the tech field often face many challenges similar to women in the brass community so it was great to hear that Anna found and was accepted to the Grace Hopper Full Stack Academy – a software engineer bootcamp exclusively for women. Check out her profile on their site here. For more about Anna’s background in her transition and her current work situation, check out this great interview here.

We are so excited to present our first guest of August: Genghis Barbie! Genghis Barbie has changed the game for chamber music ensembles, inspiring countless younger musicians with their character, musicality, and unrepentant sense of fun. It was an honor to feature them in an interview. We heard from each Barbie and cannot wait to share their amazing responses with you later this week!

GENGHIS BARBIE, the leading post post-feminist feminist all-female horn experience, is the most innovative and energizing chamber ensemble of its generation and beyond. With a combined 24 years of conservatory training, Genghis Barbie delivers to you a visceral and unadulterated musical adventure. Performing arrangements of pop music from the 60’s, 70’s, 80’s, 90’s, 00’s and today, contemporary commissions, and classical works, they are the most versatile and expansive group on NYC’s classical/pop/rock/jazz/indie/alternative/punk/electro-acoustic scene. Genghis Barbie was incepted in a unique moment of ingenuity when Freedom Barbie, Cosmic Barbie, Velvet Barbie, and Attila the Horn converged and vowed to create distinctive, interactive and personal performances. In addition to their busy New York City performing schedule, the ladies of Genghis Barbie have performed as Contributing Artists at the 2011 International Horn Society Symposium in San Francisco, played Schumann’s Konzertstück with the Southern Methodist University Wind Ensemble, and appeared on America’s Got Talent. In May 2012, Genghis Barbie made their Carnegie Hall debut in the premiere of a new concerto for four horns, commissioned by the New York Youth Symphony. As educators, they have toured numerous universities presenting workshops, masterclasses, and lectures on musical entrepreneurship. They have released four studio albums: the self-titled debut album, the holiday album “Genghis Barbie: Home for the Holidays,” “Genghis Baby: Songs for Noa,” and the newly released “Amp it Up!” Genghis Barbie aspires to appear on the Ellen DeGeneres show within one calendar year.

We are so excited to present our last guest of the month: Joanna Hersey. I met her last month when I was performing at the International Women’s Brass Conference and I knew she would be great to feature on Brass Chicks. Stay tuned for her amazing interview featuring many helpful resources and interesting experiences — posted later this week! A native Vermonter,  tuba and euphonium soloist Joanna Ross Hersey studied with Dan Perantoni at Arizona State University, received a Master of Music in Tuba Performance from the New England Conservatory of Music studying with Chester Schmitz, and earned her Doctor of Musical Arts in Tuba Performance from the Hartt School.  As Principal Tubist with the United States Coast Guard Band, Joanna performed throughout the country as a soloist and clinician after winning the position at the age of nineteen.  Joanna has played for three U.S. Presidents, performed at numerous state functions for visiting dignitaries, and has appeared on The Today Show and Good Morning America.  In her freelance career she has performed with artists including Placido Domingo, Roberta Flack, Marilyn Horne, Arlo Guthrie, Michael Bolton, Lee Greenwood, Arturo Sandoval and Jack Nicholson.  Joanna is a founding member of the Athena Brass Band, a group which has been featured at the Brass Band Festivals in Danville, Kentucky and Gettysburg, Pennsylvania with Joanna as soloist.  Joanna is currently Principal Tubist with the Carolina Philharmonic and the Carolina International Orchestra.

As a member of the Alchemy Tuba-Euphonium Quartet, Joanna performs throughout North America and Europe and can be heard on the group’s recordings Village Dances (1997) and Prelude and Groove (2012).  For thirteen years Alchemy has been in residence each February at the Horn-Tuba Workshop in Jever, Germany where the group performs recitals, gives master-classes and conducts ensembles.  The quartet also has performed recitals in Linz, Austria as part of the International Tuba Euphonium Conference, and was featured in the outdoor Fest der Natur on the banks of the Danube River. Together with Michael Parker, Joanna is also part of an exciting new duo JAM: Joanna and Michael, who have just released their first CD, featuring tuba, euphonium, cimbasso, and electronics.

Joanna has produced two solo albums, O quam mirabilis (2010) and Zigzags (2015), featuring music by composers including Hildegard von Bingen and Libby Larson in combination with her own compositions.  Joanna’s research interests focus on brass history and women in 20th Century American music, and her work has been published in the International Tuba Euphonium Journal, the International Women’s Brass Conference Newsletter, the Historic Brass Society Journal, the North Carolina Music Educator’s Journal and the Journal of Historical Research in Music Education. In collaboration with Parker Mouthpieces, Joanna has debuted the Hersey Artist Model Tuba Mouthpiece, featuring a three component stainless steel design. Visit www.parkermouthpieces.com for more information.  Joanna is President of the International Women’s Brass Conference, Associate Professor of Tuba and Euphonium at the University of North Carolina at Pembroke, and a Yamaha and Parker Mouthpiece Performing Artist.

The incredible all-female brass quintet, Seraph Brass, has almost reached its crowdfunding goal on Indiegogo. The group aims to raise $25,000 in order to fund their first album, which they will release in early 2018. It will only take a few more donations to push them past the $25,000 mark — could some generous Brass Chicks make the difference?

From the fundraiser page:

“Seraph Brass began in 2014 and is in high demand, presenting over 50 domestic and international concerts in the 2016-17 season. We are a dynamic brass quintet drawing from a roster of America’s top brass players. Committed to engaging audiences with captivating programming, we present a diverse body of repertoire that includes original transcriptions, newly commissioned works, and well-known classics. Recently, we commissioned and premiered “Wolf” for solo soprano and brass quintet from Philadelphia-based composer, Joseph Hallman and have had several arrangements made by Utah Symphony trumpeter Jeff Luke and composer Thomas Oltarzewski. Through our mission to commission and premiere new works by American women composers, we hope to continue to encourage women of all ages to study and love brass music. We have performed a number of masterclasses at universities, high schools, and middle schools. Seraph Brass is on the Allied Concert Services roster, performing tours throughout the United States. Seraph is managed by Manhattan Music Ensemble.”

Kate – I’ve played a couple times with Jen and it was so great to hear her perform at IWBC this year. I really enjoyed reading her responses to our questions and I am so excited to share her thoughts here with the Brass Chicks community! 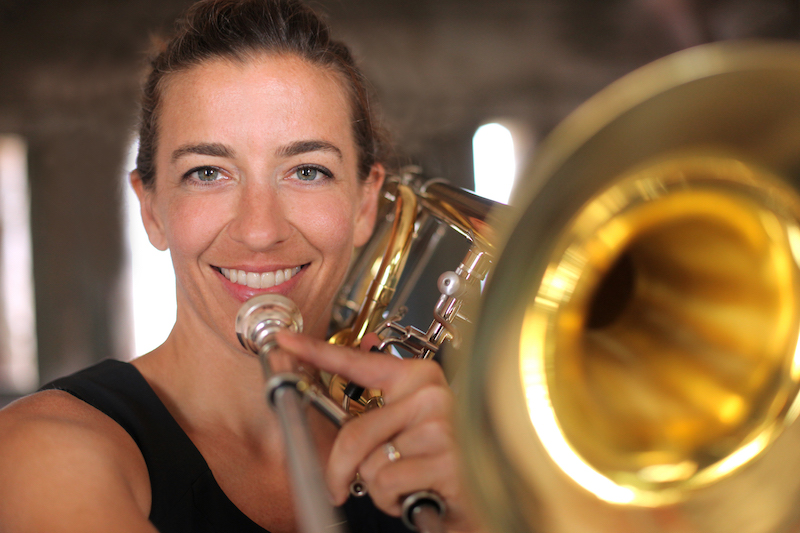 Jennifer Wharton is a low brass specialist based in New York City. Though getting her start classically, Jen has deep roots in jazz, commercial, chamber and Broadway music. Like a virus, she won’t stop until she has conquered the world.
Currently, Jennifer can be found performing in Beautiful: The Carole King Musical but has also held positions at The Gershwin’s Porgy and Bess, Jekyll and Hyde, Scandalous, Wonderland, 9 to 5 and Curtains, as well as performing as a substitute in over a dozen other Broadway productions.
Jen is a member of two Grammy-nominated ensembles, Darcy James Argue’s Secret Society and Alan Ferber Extended Ensemble. She has also performed on several Grammy-nominated Broadway cast albums as well as the Grammy-winning recording of Beautiful, The Carole King Musical.
She has performed and/or recorded with ensembles including the Vanguard Jazz Orchestra, Ken Peplowski Big Band, Kingdom Hearts Orchestra, Ayn Inserto Jazz Orchestra, John Yao and His 17 Piece Instrument, Miggy Augmented Jazz Orchestra, Walking Distance, South Florida Jazz Orchestra, DIVA Jazz Orchestra, and the BMI Jazz Composers’ Workshop.
Jennifer is an XO Professional Brass artist and plays the 1240-LT bass trombone. She teaches bass trombone at Montclair State University in New Jersey.

Want to find out more?

1. Tell us a little about yourself and what you do!

Outside of music, I’ve done about a dozen triathlons including 2 full Ironman triathlons. I’m an amateur baker and I have a dog obsession. I’m married to an amazing jazz trombonist, John Fedchock, and we’ve got two doggies, Mister and Dudley.

2. Is there anything you wished you had known as a student or young professional that you know now? Any advice that you’d like to share with younger musicians?

Do what scares you most. Always. Even if you fail. If I hadn’t followed this advice, I’d be working for Bank of America right now. If you go in with the mindset of “I know it won’t be perfect,” you allow yourself to try. I’m putting this concept to work this month by doing my first gig as a leader – something that I was scared  about for years.

3.  Any resources you recommend? Books, podcasts, recordings that changed your life etc.

As a brass player, male or female, read the full story of what Abbie Conant went through  with the Munich Philharmonic. It is heart wrenching and horrible but she not only survived it, she thrived. Her story showed me that the best revenge is success.

When I was in college, I relied heavily on Doug Yeo’s website. There is a lot of invaluable information on there and I still refer to it when I’m teaching.

Always be cool. There are too many great players to put up with someone who isn’t cool. Don’t be that person.

The Brass Herald‘s new February, 2017 issue continues a series started in December, 2015. Titled “Ladies of Brass,” the February publication features the trombone section of the Monarch brass on its cover. The 92-page magazine also includes a five-page interview with virtuoso tubist Joanna Ross Hersey and content written by the Monarch Brass, the IWBC, the Seraph Brass, and Amy Schumaker Bliss, and Mary Galime (of the Alliance Brass).  END_OF_DOCUMENT_TOKEN_TO_BE_REPLACED

There’s nothing quite like the thrill of hearing the words “International Women’s Brass Conference” on public radio!

This month, in honor of Women’s History Month, central Ohio’s Classical 101 radio station has been publishing an excellent series. The station’s “Women of Brass” has  featured the Seraph Brass, the Stiletto Brass, and Genghis Barbie so far, and has aired recordings by female brass musicians on Saturdays and Tuesdays all month. It’s great to see a prominent radio station supporting women brass musicians so overtly; classical radio shies away from innovation and mold-breaking. Shout-out to WOSU for proving that needs not be the case.

A highlight of this year’s National YoungArts Week (January 8-15) was Hanae Yoshida and Cristina Cutts Dougherty’s dynamic performance of John Stevens’ Dialogues for Tuba and Trombone (1983):

These young women’s beautiful playing is evidence that the future of brass music is surely female!  Congratulations for Hanae and Cristina on your lovely performance.

This past October, WBUR Boston published a great story about The Original Pinettes in anticipation of the band’s Honk! performance. All-female brass bands are a growing phenomenon, bringing the awesomeness of women playing brass to festivals, parades, and the streets.  This blog has historically focused on classical and jazz performers, but I want to take this opportunity to branch out and highlight these incredible musicians!