Chloe Louise Swindler is a Boston-based trumpet player. While growing up in Tucson, Arizona, she began her classical studies in trumpet at age 9. After joining the Tucson Philharmonia Youth Orchestra at age 13 and later competing in the ensemble’s concerto competition at age 16, Chloe was invited to perform the Haydn Trumpet Concerto with the orchestra. The next year, she performed the Arutunian Trumpet Concerto with the Arizona Symphonic Winds. After high school, she attended Boston University and studied under Terry Everson.

In addition to being classically trained in trumpet performance, Chloe began playing guitar in her freshman year of high school and has since composed more than fifteen songs for varying combinations of guitar, vocals, piano, trumpet, and ukulele. Here’s a link to her SoundCloud.  While attending Boston University, Chloe began to be more interested in jazz music. This led her to perform in various jazz combos as both a trumpeter and a vocalist. In the fall of 2015 during her study abroad in London, she was a part of both the Royal College of Music Big Band and Swing Band.

In January of 2017, the Boston University Dean of Students invited Chloe to perform an original song for the annual Dr. Martin Luther King Jr. Celebration. A video of that performance can be found at https://www.youtube.com/watch?time_continue=3045&v=Y5_AKfdJTDQ. In this video, she references her thesis work on African-American female instrumentalists, more of which can be found here:  https://blackfemaleinstrumentalists.wordpress.com  and https://www.youtube.com/watch?v=vXokxxiPyBw

After graduating from Boston University, Chloe began her studies at the Yale School of Music and is currently beginning her final year of the program. In her first year of the program, she joined the Yale Jazz Ensemble on trumpet and was a featured vocalist during the 2018 spring concert series. For the upcoming academic year, Chloe will be joining the roster for the Rodney Marsalis Philadelphia Big Brass as an Associate Artist. As part of the tour, she will be performing in New York, Philadelphia, Texas, Arizona, Vermont, Wisconsin, and Iowa.

How My Ethnicity Has Shaped Me As a Musician

One week ago, I took a lesson with a trumpet player in a major symphony and they asked me a question that I wasn’t expecting: are you prepared to compete in a man’s profession? At first, I was taken aback and it wasn’t until I began writing this did I realize that my answer is decidedly – yes. In this open post, I’m going to weave together my thoughts on three topics: a man’s world, my research on black female instrumentalists, and community outreach.  END_OF_DOCUMENT_TOKEN_TO_BE_REPLACED

We are excited today to share a guest post by Alyssa Wells about her path from playing trombone and baritone in bands to pursuing a PhD in Musicology. Thank you, Alyssa, for sharing your story!

Alyssa Wells is a Musicology PhD student and Rackham Merit Fellow at the University of Michigan. Her research interests include: labor union and industry bands, protest music, the politics of sound and space, and communist and socialist composers. Before coming to the University of Michigan, she completed master’s degrees at the University of Massachusetts Amherst in Musicology (M.M.) and German and Scandinavian Studies (M.A.). While at UMass, her research on Hanns Eisler and music festivals in the German Democratic Republic received funding from the German Academic Exchange Service (DAAD). Alyssa also holds a B.A. in Music (trombone) and German Studies from Western Michigan University. In her free time, she enjoys running, cooking, telling terrible jokes, and making annoying puns.

If you would have told 19-year-old me that I am now just about halfway done with a PhD in musicology, I would have probably laughed…

…In fact, until the past year, musicology had never truly felt “natural” to me. The field was intriguing and inspiring enough to decide to devote my life to it, but what I studied simply did not furnish me with the same deep personal connection that I consistently witnessed my colleagues experiencing.  END_OF_DOCUMENT_TOKEN_TO_BE_REPLACED

This post is from pianist Eunbi Kim‘s own blog and yes, it is our first honorary Brass Chick guest post (Eunbi plays the piano). We saw her post and just thought it was so relevant to the Brass Chicks Community so we had to repost it and share it with you.

Next to music, reading and books have been a great passion of mine, and I’ve been a serious reader my whole life. They provided a huge escape for me while I was growing up. My favorite writers are Haruki Murakami, Junot Diaz, Banana Yoshimoto, Julia Alvarez, Wally Lamb, and Margaret Atwood. Stories and books have the ability to expand our humanity and raise our consciousness. I also read a ton of business and music business books, and I’ve listed below some of my favorites (not in any order).

END_OF_DOCUMENT_TOKEN_TO_BE_REPLACED

This is a re-post of Nicole’s post from her own blog, City Trombone Lessons. Please check out our previous posts for more about Nicole and her interview.

At the start of this month, I had the privilege to be a part of the 25th International Women’s Brass Conference. In addition judging some of the competitions, I performed with the Monarch Brass Ensemble. Every time I play with these incredible musicians I feel inspired and re-energized. The support for one another is palpable on the stage as well as in the audience. The way that we feed off of this energy is in our musical risk taking.

It is often the case that a performer expects the audience to be looking for things she or he does wrong. As if each audience member is actively ticking down marks for each missed note. After a lifetime of auditions to get into summer festivals, schools, competitions, and jobs, it’s not a surprising response. At IWBC, the overwhelming feeling in recitals is that people are there to hear what you do well. We want to know what we can like about yoour performance rather than trying to find things wrong with it, or trying to judge how we measure up to one another. I’m not sure why this is so strongly the case here and not as much elsewhere, but I do know that we should keep this in mind when each of us is an audience member in the future. Attend a performance to see what you can admire about the musicians. What can inspire or move you? Send thoughts of support and respect out into the world when someone is brave enough to put themselves out there. These acts will come back to you when you are the one on stage, and I promise you will be grateful for it.

For those of you who weren’t able to attend, here are some live videos of the evening performances.

This is a re-post of Jennifer Wharton’s post on her own blog, View from The 4th Chair. Please check out our previous posts for more about Jen and her interview.

The International Women’s Brass Conference took place this past June in South Jersey at Rowan University. On top of meeting a bunch of ladies who rock, I was lucky enough to be asked to perform with Athena Brass Band, DIVA Jazz Orchestra and in Jeannie Little’s recital/presentation.

Athena was filled with professionals in service bands, brass bands and symphonies around the country and directed by my longtime friend, Jessica Sneeringer. I met Jess in the Disneyland College Band in 1999. (Read my article about it here.) After 5 extremely well-run rehearsals and a soundcheck, we took the stage. The music selection, the soloists, the level of sensitivity in the band – everything blew me away. We made some great music that night. In case you missed it, listen to the Athena Brass Band at the IWBC 2017 here. 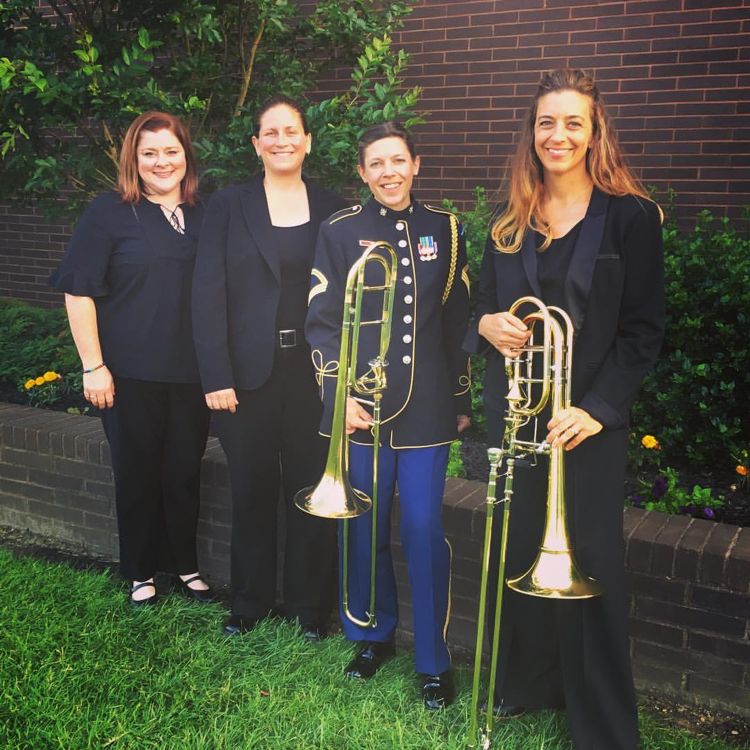 My second performance was filling in for Leslie Havens in the DIVA Jazz Orchestra. DIVA is led by drummer Sherrie Maricle and has been around for decades and has been home to folks like Ingrid Jensen, Nadje Noordhuis, Jen Krupa, Sharel Cassity to name a few. It’s always really impressive how deep the “bench” is for DIVA – there are always new players that get some of their first big opportunities from Sherrie. I always feel like it’s an honor to be able to sub in the band and try my hardest to do a great job in Leslie’s absence. There are some tasty stuff for the bass bone to play in Scott Whitfield’s arrangement of 76 Trombones and on I’m Gonna Go Fishin’. The whole concert is can be viewed here. Enjoy!

Finally, on Saturday, I joined Carol Jarvis (Sting, Seal, London Symphony), Natalie Mannix (University of North Texas, Delaware Symphony) and Donna Parkes (Louisville Symphony) for Jeannie Little’s (Montana State University and loads of orchestras) recital/presentation. We played Jeannie’s arrangement of Getting Sentimental Over You and then she spoke about Tommy Dorsey and his influence on French music, specifically Tomasi. I wish I could’ve taken everyone with me back to NYC!

I didn’t get to see as much of the conference as I would’ve liked. I didn’t get to talk to Abbie Conant (who I met doing a Chinese Funeral in San Francisco but that’s a different story). I didn’t get to hang a lot afterwards. But what I did hear and see and the people I did meet will stay with me for a long while. Ladies, YOU ROCK!