Kaitlyn Resler, 22, born in Orlando, Florida, is a master’s degree student at The Juilliard School and a recipient of a Kovner fellowship. Ms. Resler also received her bachelor’s degree from The Juilliard School, where she studied with Julie Landsman. Ms. Resler is currently an active player with Wicked on Broadway, The Colorado Symphony, the American Ballet Theatre Orchestra and the Florida Orchestra. Kaitlyn is Co – Leader of eGALitarian – a brass ensemble of women musicians in NYC dedicated to improving and inspiring the lives of women in the community.

Pit life is one of the most fun playing experiences I’ve ever had. But as we all know… it does often require a significant amount of downtime, often with nothing to do but dwell inside our crazy, beautiful minds! These are five things I realized about myself in the past few months while I had those endless hours of pit contemplation.

1. You can’t win at music. Sure there are competitions, job auditions etc… but ultimately isn’t music all about sharing a story with the audience and impacting lives? When I put it into this perspective the concept of “winning” music seems a little silly.  END_OF_DOCUMENT_TOKEN_TO_BE_REPLACED

Émilie Fortin is a Montreal-based adventurous musician and teacher who explores every possible facet of the trumpet. A versatile performer, she is a freelancer for several ensembles and orchestras. She has contributed to the creation of more than a dozen works with various emerging composers in an effort to enrich the repertoire of her instrument. She currently plays with the Griffon Brass Band. Originally from Abitibi-Témiscamingue, she received a bachelor’s degree in classical performance with Lise Bouchard at the Université de Montréal. In the spring of 2017, she completed her Master’s degree at McGill University under the direction of Russell DeVuyst. Perfecting her craft with great masters, Émilie always seeks to excel in her personal practice. It is with this in mind that she has participated in brass workshops at Domaine Forget and Chosen Vale (Vermont). She was selected to be a member of the Montréal Contemporary Music Lab in the summer of 2016, as well as a participant for Soundscape Festival (Italy) in 2017 and for Banff’s Evolution Ensemble program for this summer. Firmly believing that pedagogy is an integral part of performance, Émilie is a teacher in various secondary schools in the region. She has also had the opportunity to teach the trombone, trumpet and music theory at an orphanage in Croix-des-Bouquets (Haïti). During the 2017-2018 season, she developed her focus on community engagement and teaching with The Global Leaders program, where she was one of 35 people selected for an international cohort of enterprising young musicians.

1. Play music that you like
You don’t have a jury to please anymore, or a specific format to fill (unless you’re participating in a competition). Play that sonata you always wanted to do but was too chop-tiring for a 60-minute recital, try that cool chamber music piece with your friends, or arrange some pre-existing works! It’s so easy to feel that playing music is a chore after being at music school that it’s essential to be back in touch with the pleasure of creating art. In my case, I made a list of people I would like to play with, teachers I would like to take lessons with, and music I would like to perform. After finishing school, I found this was a great way to help me keep me motivated and keep track of my goals. Rather than just playing gigs, I’m organizing my own concerts with the repertoire I want to play. I’m surrounded by musicians and friends who are willing to embark with me on crazy projects, so I’m always inspired. Don’t wait for opportunities; create them! END_OF_DOCUMENT_TOKEN_TO_BE_REPLACED

Christi is a freelance trumpet player and soloist based in the Oklahoma City area, and is currently traveling with the national/Asia tour of Kinky Boots. She holds Bachelor’s degrees in music education and trumpet performance from Central Washington University, as well as a Masters and DMA (ABD) from the University of Oklahoma.

For the last year, I have been traveling with the North American tour of Kinky Boots. The show has a great message, the music was written by Cyndi Lauper, and I’m getting to see parts of the country I never thought I would see. Most importantly? I have a full time job, with benefits, where all I have to do is play my trumpet.

That being said, it’s not always the most glamorous life. There are several things I have learned to help me survive: END_OF_DOCUMENT_TOKEN_TO_BE_REPLACED 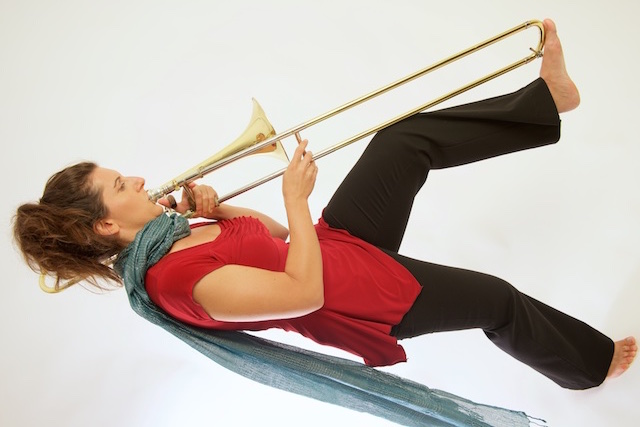 Jen Baker, trombonist/composer, has collaborated with artists all over the world in site-specific mixed media performance, concert halls, solo and chamber commissions. As an improviser she is featured on the soundtrack to Werner Herzog’s Oscar-nominated Encounters at the End of the World. She has performed internationally in festivals and has toured with Arijit Singh, Karole Armitage, and Mansour, and new music ensembles S.E.M., TILT brass, and the mobile ensemble Asphalt Orchestra (founding member). Her forthcoming book, Hooked on Multiphonics aides composers and trombonists in understanding and executing the deep complexities of multiphonics. She currently teaches trombone and composition at Sarah Lawrence College and also Brooklyn Conservatory, through which she goes to after school programs in various neighborhoods in Brooklyn for trombone classes (New York City does not fund public school music education, so this program is a vital way of bringing music to kids who wouldn’t have it otherwise.). She loves improvised vegan cooking (10 years and counting!), teaching, listening to animals, and long meandering walks.

Tell us about your project, Silo Songs. How was the process of recording and putting it together different than that of your previous albums like Blue Dreams? How did you balance that with all of your other responsibilities in NYC?

The fundamental inspiration for both projects came from physical surroundings of the family farm where I grew up. At the time of Blue Dreams I was intrigued by the beauty of slow motion decay and decomposition many disused barns were undergoing (and continue to do): rusting roofs, peeled paint, weathered wood, bent rebar, piles of orange twine knotting together, entire barns leaning impossibly far but not falling. Silo Songs was developed entirely inside one of the buildings on the farm- a large concrete grain silo, completely empty since the 80s. END_OF_DOCUMENT_TOKEN_TO_BE_REPLACED

Mariel Bildsten is a trombonist, based in New York City. Mariel works as a bandleader and side-woman in New York, playing in jazz big bands and small groups, as well as world and Caribbean music, classical, funk, r&b, and Latin music bands. She has performed at Jazz at Lincoln Center, Carnegie Hall, the Apollo Theater, the Chicago Jazz Festival, Perth International Arts Festival, Caramoor Jazz Festival, Smalls Jazz Club, and Smoke Jazz Club, among other venues. Mariel has also performed alongside Dee Dee Bridgewater, Roy Hargrove, Wycliffe Gordon, Frank Lacy, Brian Lynch, Cyrus Chestnut, and Lew Soloff. Her own groups (ranging from duo to septet) have headlined jazz festivals, played around the country, and gig regularly in New York City. She graduated from the New School for Jazz and Contemporary Music in December 2015. During her time there, Mariel had the opportunity to study with fantastic teachers and mentors, such as Elliot Mason, Steve Turre, Vincent Gardner, Mike LeDonne, Reginald Workman, and Jane Ira Bloom.

In 1978, psychologists Pauline Clance and Suzanne Imes named impostor syndrome as a feeling of “phoniness or fraud in people who believe that they are not intelligent, capable or creative despite evidence of high achievement.” Impostor syndrome presents itself through chronic self-doubt and feeling unworthy of opportunities.

It is a thought-process that we all deal with, to varying degrees. Even as I’m writing this blog post, I’m telling myself “Mariel, who are you kidding? You’re not a writer, go and practice trombone!”

1. Remember that you are there for a reason
Whether “there” is a gig, rehearsal, recording session, teaching position, or conversation, people who struggle with impostor syndrome will look around and say “How the hell am I here? I am a fraud. This must be a mistake.”  END_OF_DOCUMENT_TOKEN_TO_BE_REPLACED

Today’s post is by our very own Kate Amrine – she felt inspired to do some end of semester reflecting after seeing so many friends, colleagues and students graduating.

A passionate and creative performer, Kate Amrine is a prominent trumpet player balancing a multifaceted career from developing new repertoire and curating concerts to freelancing with many different groups in the New York City area. Recent performances include a tour of Japan with the New York Symphonic Ensemble, a solo recital in Mississippi at the Music by Women Festival, and an opera at BAM with string ensemble A Far Cry. Upcoming performances include new music with orchestra at Carnegie Hall and the Miller Theater, a workshop of a new off Broadway show by Duncan Sheik, a concerto in her hometown in Maryland, and a concerto and orchestra tour to Japan. Kate is extremely dedicated to commissioning and performing new music, premiering over 30 pieces both as a soloist and a chamber musician. Her debut album was released in November 2017 and features new music by women composers. Kate also frequently performs on Broadway and in other regional musical theater productions both in and outside of the NYC area. As an educator, Kate enjoys teaching in several after school music programs and teaches private trumpet lessons as an Adjunct Instructor at New York University.

1. What do you want to do?
This is perhaps the most obvious question of them all. I am sure we have all heard this from friends, family, teachers, and even people at the grocery store. But it is super important to think about – even if what you want is “unrealistic.” Thinking about your version of an ideal career can open your eyes up to what is possible, what would be the best case scenario, what you are willing to do to get here, and what you don’t want to be doing at all.. Also, don’t be afraid to think big – what would be the best case scenario for your career – it could be something like winning a job, playing with a certain famous musician, or giving recitals across the country. Similarly, don’t be afraid to think “small” – sometimes what you want to do could be as simple as recording an album in the year after graduating or starting a group with friends. Having goals of different sizes aimed for different points of your career is definitely the way to do it. END_OF_DOCUMENT_TOKEN_TO_BE_REPLACED